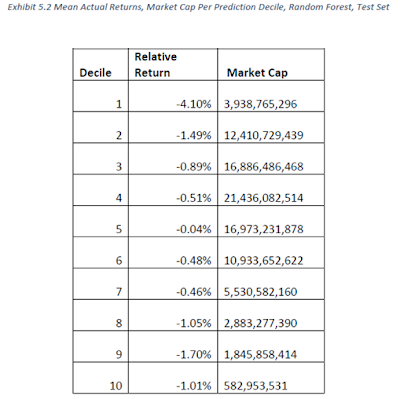 why is the market cap so small. current us mktcap is ~20 trillion and all 10 deciles total up to something < 100 billion according to your table, i.e. well under 1% of total mktcap. additionally, i would guess that it's the larger companies that have more insiders buying and selling and are also more diligent and timely in reporting. what am i missing?

Thanks for your comment! I probably could've clarified the The Market Cap column more effectively. The Decile column did not represent a grouping by Market Cap. It merely represented the Predicted Return groupings based on the model, as built upon the Training set. The 2nd column represents actual avg return per decile in the Test set(2014-2015). The Market Cap column represents the Avg Mkt Cap within each decile group. Each of these deciles can contain large or small cap stocks. By averaging them, I wanted to see if those with a higher avg had a different return profile. As it turns out, they did..a little bit. Deciles 8,9,10 were the lowest 3 average market caps per decile. The other Decile Mkt Caps were all over the place, unfortunately.

Thanks for the article, John,
Did you actually tried to run this on short sellings? Thanks

Hey Eduardo,
I ran this only for Insider Buy trades of equity securities. I do plan to revisit this data set in the future and explore other scenarios.

I come back to you again to seek for help for applying strategies on Matlbab. On the website providing all the Matlab codes, I can't find the input data USDCAD. This data set in important for all the stationary test before implementing mean reversions strategies.
I tried all the data sets on your website but the code doesn't work only for this case.

Please, can you upload again that dataset ar help me to find it?

Thank you for your understanding and your incredible help.