Quantitative traders can sometimes lose sight of the fact that many profitable trading strategies are extremely simple, requiring no math at all. Such is the case with a seasonal spread trade between platinum and gold that was profitable in all but one of the last 7 years. This is far more consistent than the seasonal spread trade that ruined Amaranth (see my earlier article).

The strategy is extremely simple: buy 2 July contracts of PL and short 1 June contract of GC around the end of February, and exit the positions around mid-April. (The gold futures contract specifies 100 ounces, while platinum is only 50, therefore we need to buy 2 contracts of PL vs. 1 contract of GC.) I first read about this strategy in an article by Jerry Toepke in the SFO Magazine in the beginning of 2006 and I decided not only to backtest it, but also paper trade this strategy in 2006 to see if it works its magic again. Both the backtest and the paper trade worked as advertised, despite being widely publicized by the magazine. I plot the P/L in this chart: 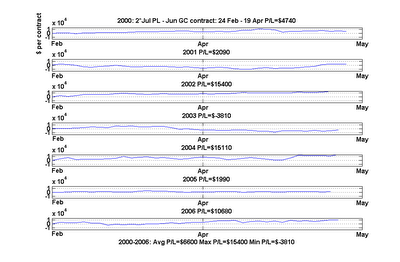 What is the fundamental reason this seasonal spread works? Amusingly, it has to do with the end of the Chinese New Year. According to Mr. Toepke, the demand for gold is driven by demand for jewelry. Asian countries such as India and China are the largest consumers of gold. A series of festivals and celebrations in these countries around year-end lasted till the end of the Chinese New Year in February, after which demand for delivery of gold is seasonally exhausted. Platinum, on the other hand, is primarily used in catalytic converters for automobiles, and the seasonality is much weaker. It is therefore handy as a hedge for gold prices.

Dr. Chan,
I recently came across your blog and really enjoy it.
For the PL-GLD article I am unable to see a larger image of the graph. I was wondering if you could look into it or it might just be my comp.

Keep up the good work.

Dear Cesar,
Thank you for your comments. I find recently that the beta version of this blogging software does not allow magnification of images. If you send me an email, I can email the image file to you.
Ernie

My email is Ceas15@gmail.com.
Thanks for your help.

seems like an arbitrage between different calendars. other than gold oil consumption is another commodity that is common between english and other calendars like indian and chinese.. would be interesting to see if an arbitrage opportunity exists between calendars as similar factors come into play.. here's an example: people travel a lot for thanksgiving weekend in US consuming more oil/gas whereas this doesnt happen on other calendars..

a very interesting article and something that makes sense to me as i know the pattern of gold buying during festival seasons in india..

Interesting observation, but what is the risk of the spread? What is the maximum margin required to carry the the trade during entire study period and during an average year? Thank you.

Dear taggartgalt,
You made a very good point. The maximum drawdown trading this spread since 2000 is $10910 (in 2001), which means the maximum margin requirement is $11,653. The interim risk is considerable, even though the final P/L of that year is positive.
Ernie

Hey nice blog. Read your short paper on Kelly position sizing. Good stuff. I would like to do some investigation and backtesting with spreads. How do you examine these relationships historically with software? I've found it difficult to do with some of the most common backtesting platforms.
-Paul

Hi Pablo,
Thank you. I did most of my research on Matlab. It can be an expensive software to use though. For these simple spread models, an Excel analysis can often suffice.
Ernie

Thanks for the info. Please forgive me because I'm a little new to spread trading, but I did some sleuthing on this PL/GC spread. I read the SFO article, and then went to the NYMEX website, and as you said they require 2 PL to 1 GC. I find this odd however because after taking a 504 day ATR of the price of each commodity (~$9.77 for GC) and (~$17.00 for PL), and multiplying each by their native multipliers (100 and 50 respectively), you get $977.00 = 1 ATR move for GC, and $850.00 = 1 ATR move for PL. The ratio between the two is approximately 0.87 (PL/GC). So when you double up on the PL to get the margin discount from the NYMEX, they are actually allowing you to have a semi outright position in platinum! Does this sound correct? I see the exchange is trying to equalize the ounces, but it doesn't makes sense to me in terms of risk.

Pablo,
You are right. I was a little confused when I traded this spread myself. From a market value point of view, this spread is certainly not dollar-neutral. (1 GC contract worths about $6,650, 2 PL contracts worth about $12,260.) Your ATR calculations can also be corroborated by studying the mean absolute daily returns of the respective contracts. The mean absolute returns are about the same, but because the market value of the long PL side is double that of the short GC side, the dollar risk is almost equivalent to owning one contract of PL outright, as you pointed out. I don't know why the spread has to be constructed this way, but if you construct it the dollar-neutral way, it is far less profitable both historically and in my real trading test.

Thanks for pointing out this subtlety!
Ernie

Very interesting article, which raised an issue with spreads, about which I have yet to find a good resource. This is the method in which you construct them. In this article he is matching dollar Big Point Value. In another article from your blog by Paul Teetor, about the RB/CL spread, he cointegrates. With the crush spread, the amount of product is considered. I'm wondered if you had any thoughts on the differences of these and other methods?

David,
Cointegration is a general test to apply to another spread if you don't possess any specific fundamental information about the 2 legs. If, on the other hand, you know something about soybean economics for e.g., then you may be able to profit from a unusually high or low crush spread.
Ernie