Nick Maouis, the founder of Amaranth, claims that the 6-billion dollar loss that his fund suffers is due to a “highly improbable” event in the natural gas market. Some analysts have thrown doubts on this claim. To see how improbable this loss is, let’s take a quick look at the historical performance of this trade since 2000. This is not only of forensic (and perhaps legal) interest: if Mr. Maouis’ claim were true, it would have furnished us a glimpse of a potentially highly profitable trading strategy.

The bet that Amaranth and its head trader Brian Hunter made is that the March-over-April spread in natural gas futures will increase in value throughout the year prior to the contract expiration. Unfortunately for their investors, the spread decreases rather than increases in September, resulting in a $6 billion drop in value. We don’t know the exact time when Amaranth bought this spread. However, it is likely that they have started buying in April of this year. April is the time when the nation’s natural gas storage inventory coming out of the winter is known and thus provides a foundation to bet on next winter’s natural gas sufficiency. I plotted below the profit-or-loss of buying this spread (long one March contract of the following year, and short one April contract) in April and exiting the position at the end of September every year since 2000. (Click on the graph twice to make it bigger.) 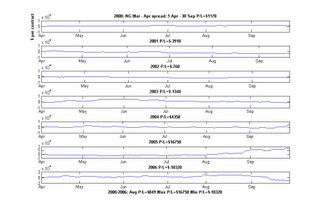 To my surprise, this trade loses money 3 out of 6 previous years. The one year that this trade was very profitable is 2005: it made more than $16,000 profit per pair of contracts. This is consistent with a Wall Street Journal report that Mr. Hunter made $1 billion for Amaranth in 2005. That was indeed due to an improbable event last year: Hurricane Katrina.

Note also from the 2006 graph that, consistent with news reports, the trade was actually quite profitable up till the beginning of September. This paper profit may not be easily realized by Mr. Hunter though, since a lot of it may be due to his aggressively increasing his position and driving up the market.

Now there can be several objections to my analysis. You might think that if we hold on to this spread position longer, say till December, it would have been more profitable historically. My research shows otherwise. Holding till December would have resulted in losing 4 out of the previous 5 years, losing even in 2005. You might also argue that this is an extremely simplistic version of Mr. Hunter’s strategy. No doubt Mr. Hunter used various complex options strategies, continuously adjusted with various fundamental factors such as weather prediction and natural gas inventory reports as inputs. However, from a risk management point of view, the portfolio that Mr. Hunter owns seems highly correlated to a plain vanilla spread position that I described. The fact that this plain vanilla position loses money half the time historically would not have been reassuring.

In a future article, I will describe some calendar spread trades in energy futures that do have a much better profit consistency.

Great Blog! I know it will take a lot of time to read all of the posts but it's worth it! Thanks very much for sharing the knowledge.